Isn’t it ironic how some things get postponed again and again until you are finally ready to do them at the right moment? It happens to me a lot.  After living in Seattle for almost half a year I finally decided to see the house where Kurt Cobain lived and ended his life on February 18th (2008). I am so bad with dates that it did not even occur to me that I felt the urge to go there just 2 days before what would have been his 51st birthday.

Cobain’s house is just off the shore of Lake Washington: merely 4 miles away from my humble university housing. Since exchange students don’t have a car (nor a license) I have to get there with King County Public Transit: the dreaded public transportation service which everybody complains about but I do not mind at all.

It is slow. It is often late. And its routes are stunningly convoluted. However, it is my cheapest option and the extra detours are actually because I get to see many parts of the city I would not really think of visiting.

At one point I was the only person on the bus so the driver started a conversation and it was a pretty chill ride. I enjoy looking out the window and just soaking up the city around me. You know: the small pleasures of the introverts.

Saturday by the lake

It is a Saturday so I am in no rush to find the house. I really do not get why people are so critical of Seattle weather. Yes, it is a bit challenging to have 3 to 4 seasons within the same day, to go out wearing a coat and umbrella, spend the afternoon under the sun with only a t-shirt and then come back home under the rain, but then again: life is never boring here.

This particular Saturday in February felt like a spring afternoon: sunny, warm and welcoming. I remember hanging out by the water and taking photos for quite a while.

The main reason for taking my time was that the neighbourhood between Madrona Park and Lakeview park is just a great place for a walk. People hanging out with their dogs, quays and boats, and views of the mountain beyond the lake…

The second reason was a bit less impressive…

Although I had spent some time in the US already I simply forgot that bigger boulevards get an extra letter in the address pointing which direction you should take. I was looking for a house on Lake Washington Boulevard but I forgot it should be on the East side (Lake Washington Blvd E), not on the West side. So it was a bit of a surprise when I got to the right address and there was nothing there. You see, the numbers on the street double as well.

I met a policeman midway through my confused quest for the right address and the second I told him which number I was looking for, he simply smiled and said “Oh, you are looking for Cobain’s house? Right this way”. And he explained to me how to get there and the difference between Washington Boulevard E and W.

“Oh, you are looking for Cobain’s house? Right this way”

We don’t get such polite and helpful officers at home, so I remember being really impressed (and awestruck) by his presence.

The House where it all happened

I did my best to be respectful and only took pictures from the small park in front of the house and the nearby steet above the property from which you get a better unobtrusive view. I have read stories about people breaking in to take photos or even hang around in properties once owned by their favourite musicians and actors but I really do not approve of this. This is breaking and entering: it is punishable by law and it disturbs the life of the new owners, so please do not do that. Be civil and respect people’s right to privacy even if they happen to live where your idols once used to dwell!

Kurt was born in Aberdeen (Washington state) but he spent his last years in Seattle and lived and died in this house. If you know him mostly through his commercial success with Smells like teen spirit, I recommend the movie About a son: a great documentary which will shed more light on him as an artist and as a person. For a more loose interpretation of events, Gus Van Sant’s Last Days is also a film worth seeing.

The only way to know this used to be his home is if you look the address up or if you pay attention to the small wooden bench in the park next to the front door. People have scribbled all kinds of messages on the bench and leave various small trinkets, flowers and notes.

Sitting there and listening to my favourite Nirvana songs like Lithium was a quiet and a bit surreal experience. It is strange to be just a few meters away from a place which went down in history and yet feel the normalcy of everyday life passing through it. 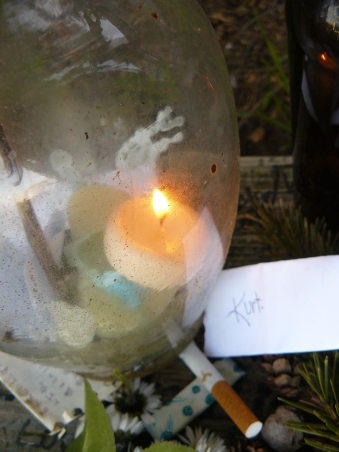 Some guys come and sit down to smoke so I snap a quick portrait and I am ready to head back home. Suddenly it does not feel very safe to hang around.

The Bulgarian version of this article was originally posted on February 19th, 2008 on my personal blog. Exactly 10 years later, rewriting it feels like it happened yesterday. Each photo opens a (heart-shaped) box of memories and details I thought I had long forgotten.

You know, you remember some days so vividly even after years go by. 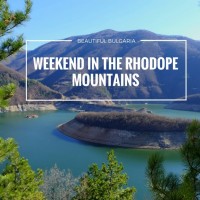